A colt by exciting first season sire Merchant Navy topped Day 2 of the 2020 Magic Millions National Weanling Sale at the Gold Coast on Friday. The colt gave vendor Rothwell Park Thoroughbreds the honour of selling the top priced lot on both sale days when he sold for $210,000. The day's top seller is the first foal of the Sydney winning Rip Van Winkle mare Awoke who herself ran fourth in a Gr1 Flight Stakes, and is a half sister to the group winner Cismontane. When the auctioneer's gavel fell it was Fergal Connolly of Valiant Stud who outlasted all other bidders with his $210,000 offer. "They are very good solid conformed types," Connolly said of the Merchant Navy stock. "This colt moved very well and I thought he'd appeal to so many people with his family being very up to date and modern. He’s a standout colt for me with the way he moved." Another weanling to feature on Day Two was Lot 947 - Newgate's Russian Revolution colt from Silent Cash who was purchased by Cangon and Sledmere Stud for an even $200,000. The colt is a half brother to group winner Get the Nod. 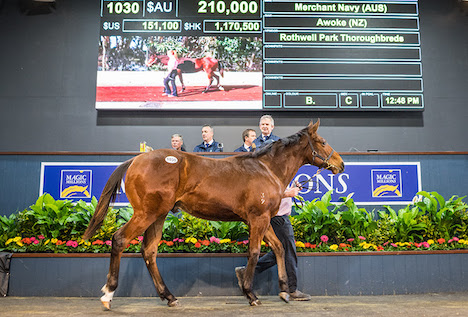