In a clear sign of the growing embracement of digital thoroughbred sales, Inglis Digital is celebrating a momentous 2019/20 season with the conclusion of the July (Late) Online Sale on Thursday grossing $2.1 million – bringing the overall season total to over $40 million. The July (Late) sale finished with a 79% clearance and marks the nineteenth consecutive sale to gross more than $1 million, while the platform can boast a total 63 lots to make $100,000+ since 2018. The top lot of the sale was young Pierro mare Rotterdam, which sold for $140,000 to William Johnson Bloodstock. The daughter of Sarasota was offered by Coolmore Stud in foal to Pride of Dubai – currently leading the first crop sires table with just days to go in the current season. Two lots sold for $135,000 – 2YO colt Sharpshooter (Hinchinbrook) offered by Newgate (as agent) and purchased by Wollongong businessman Tory Lavalle, and classy stakes-performed mare Schilldora which was purchased by Elwyn and Andrew Rea of Lambton Grazing on account of Richard Jolly Racing. Schilldora is the fifth race filly to fetch more than $100,000 in 2020 and it follows the benchmark set by Manaya ($400,000), Set Goals ($321,000) and Kinky Boom ($150,000) in June/July 2019. 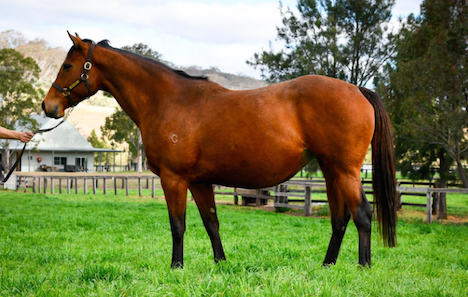 Well pedigreed Rotterdam is in foal to Pride of Dubai (pic: inglis.com.au)