It is irrefutable that Widden Stud has a bona-fide rising star stallion in Zoustar. The son of ill-fated Northern Meteor was Ausralia’s Champion First Crop Sire (#42 on the General Sires), Champion Second Crop Sire (#17 on the General Sires), and now he’s smashed the door down to the inner sanctum, Australia’s Top 10, where he will finish seventh overall in 2019-2020. What stands him apart is that he started his stud career in 2014. With the exception of Rubick whose earnings were boosted by Yes Yes Yes’ The Everest win, Zoustar is younger than the other leading 18 general stallions in Australia. Excitingly for Widden, they could have a second coming waiting in the wings in the shape of Zoustar’s best son, juvenile Gr2 winner Zousain; the $400,000 yearling finished an agonising runner-up in three separate Gr1 races including the JJ Atkins, Coolmore Stud Stakes (where Zoustar sired the trifecta) and Gr1 Golden Rose. A veritable clone of his sire, and out of a Group-winning mare who was equally successful in Europe and the US, Zousain brings a huge amount to the table at $19,800 on debut. Click on the below image for a review of his enticing 2020 Sires profile. 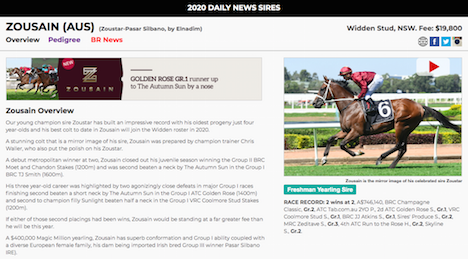