Moose to Challenge for Summer Riches

Nick-named Moose in the Jack Duncan stable, rising 4YO gelding Wapiti is being prepared for a potentially lucrative summer carnival campaign in Queensland that will also incorporate the rich Magic Millions Carnival. Like 10 other thoroughbreds around the world before him, named after a North American red deer, Wapiti is a son of Mossman’s multiple Group 1-placed Group winner Lover Conquers All. An ultra consistent run of form between April and July saw the Sunshine Coast-trained gelding claim a well deserved victory in the Gr3 Winx Guineas at his home track earlier this month. With another start to come on Saturday, Duncan, who purchased Moose privately after being taken by him as a weanling, told racing racingqueensland.com.au, “Wapiti will spell after this race and will head towards the summer mile races and the Magic Millions carnival. He’ll be set for the 1800 metre (Magic Millions Trophy) on Magic Millions day and (stablemate) Love Express will also spell and probably head the same way.” 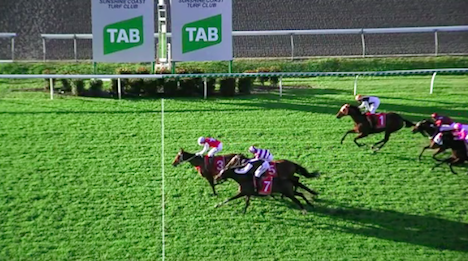 Wapiti fought back in the Winx Guineas (pic: racingqueensland.com.au)