With Aquis Farm taking its largest ever draft to this year’s renewal of the Magic Millions National Sale, it has a couple of strong Japanese tenticles to its vast offering. Heading affairs is one of the best bred mares in the world, Or Fin, in foal to Japan’s rising sire star Lord Kanaloa whose progeny include Gr1 stars Almond Eye, Gr1 Blue Diamond winner Tagaloa as well as the Gr1-winning colts Saturlina and Stelvia. Or Fin is a full-sister to six-time Gr1-winning Japanese Champion Orfevre and dual Gr1-winning Champion 2YO Colt Dream Journey. Meanwhile, Aquis will also offer four mares in foal to their 2019 Japanese freshman sire Brave Smash (Tosen Phantom), twice a Gr1 sprint winner in Australia. One of the quartet is impeccably bred Our Girl Racquie (Fastnet Rock), an immediate member of the Redoute’s Choice family being a granddaughter of blue hen Shantha’s Choice. She is out of a half-sister to the dam of leading young stallion Rubick. 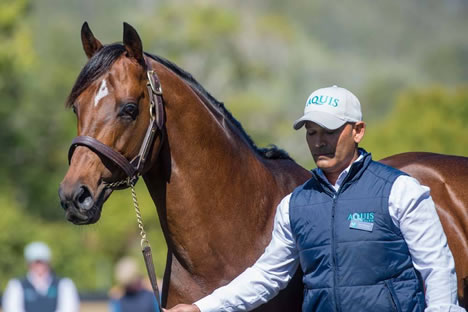