Headwater Debutant Lives Up to Hype

Many an untried 2YO with a boom on him or her capitulates on raceday when the blowtorch gets applied. Although the rumours were flying thick and fast before yesterday’s Sandown meeting, it wasn’t until minutes before he made his debut that trainer John McCardle – already the trainer of seven individual 2YO winners this season – confirmed that cleverly named Hydro Star (Headwater) is potentially the best of his juveniles. A son of Vinery Stud’s exciting young sire Headwater (Exceed and Excel), Hydro Star was pretty much last turning for home but rounded the field up like an experienced kelpie before dashing clear for an authoratative victory. McCardle told racing.com, “Myself and Jamie (Mott, jockey) think he’s the best of the 2YOs that we’ve produced this year talent-wise… When he galloped with Humma Humma (a Group winner) and put her away… that was before he’d even trialled!” A paltry $15,000 yearling at the Inglis Classic Sale, Hydro Star is as raw as, and all legs, and is now a serious 3YO in waiting. The $21 chance for the Gr1 Caulfield Guineas is yet another example of the precocious types Gr2 Silver Slipper winner Headwater is throwing. Standing at $13,750 for the 2020 season, Headwater is now second on the Australian First Season Sires table by individual winners (12) to Spill The Beans (13). 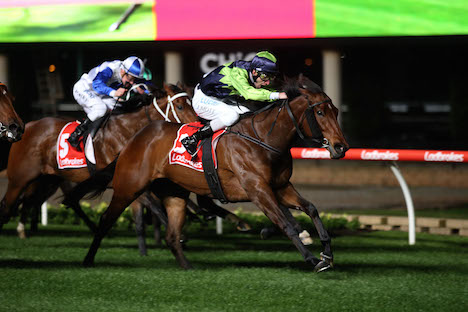