Among a cluster of exciting young stallions, Vinery Stud's Press Statement has always been on the radar of breeders and owners, and his latest winner over the weekend will have done little to dampen that enthusiasm. By champion sire Snitzel's ill-fated half-brother Hinchinbrook, Press Statement was a Gr1 winner as both a 2YO and 3YO for trainer Chris Waller, joining a rare club of young horses to achieve the feat. It's fitting, therefore, that Giovanna Run – carrying her sire's yellow and black Muollo family silks – scored a very promising victory at Randwick for Waller. Controlling the tempo from the front, Giovanna Run found a strong kick over the final 200m. Tommy Berry emphasised after the win that the filly is better ridden with a sit, however the lack of pace on paper saw connections decide to push forward. According to racenet.com.au, an enthused Chris Waller commented, "She is a filly that I think is a 3YO that fits into our mould of looking after her and she will be a nice horse. I will find a race for her in four weeks and not spell her and give her a chance to get through to a Flight Stakes." Waller noted, "It (the Flight Stakes) normally has 10 runners every year and then I'd give her a spell after that." 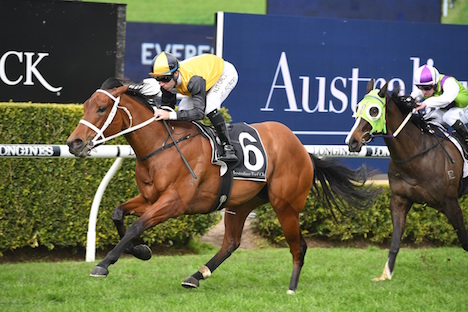