A $800,000 yearling purchase by Orbis Bloodstock at the 2019 Inglis Melbourne Premier Sale has quickly been shortened in Golden Rose markets after an emphatic victory at Rosehill. North Pacific, who topped last year’s major sale at Oaklands Junction, is by highly touted I Am Invincible sire-son Brazen Beau out of the O’Reilly mare Up In Lights. After solid support he started $2.70 favourite for Team Hawkes following his eye-catching third on debut behind Farnan in the Gr2 Silver Slipper Stakes. Looking one of several chances in the straight, North Pacific quickly chimed in to power away in very heavy conditions. He is now into $15 for the Gr1 Golden Rose, with co-trainer Michael Hawkes confirming to Sky Thoroughbred Central the stable has always held a high opinion of him: “He’s going to be a force to be reckoned with…He’s a lovely colt. He’s got a great attitude and Orbis once again have unleashed another one. They’ve put a lot of money into the industry and they are starting to reap the rewards." 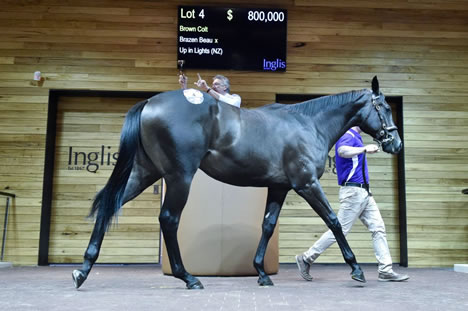 North Pacific has furnished into a promising colt (pic: inglis.com.au)