An announcement later this week is believed to be pending that will see star 3YO Alligator Blood (All Too Hard) become the third horse confirmed as a starter in October’s $15 million The TAB Everest (1200m) in Sydney. According to dailytelegraph.com.au, Alligator Blood’s owner Allan Endresz has intimated that negotiations are at an advanced stage with an Everest slot-holder. If successful, it would guarantee the superb sprinter-mile a start in the world’s richest turf race, run at Royal Randwick on October 17. Endresz revealed, “We have an agreement that is in place and now it is a case of settlement.” That’s expected to occur by Friday. Already second elect for The Everest behind Nature Strip, Alligator Blood’s planned program could also see the David Vandyke-trained gelding start in the $7.5 million Golden Eagle. 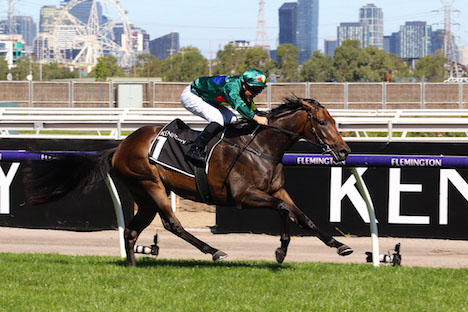 Alligator Blood will have no problems with racing clockwise (pic: Mark Gatt)