Keep Aimee's Jewel in your black book. That's the thought of trainer Trudy Keegan after the filly's dominant debut victory over 1200m at Awapuni on Saturday. The daughter of Proisir missed the jump by a couple of lengths before she quickly regathered the pack under the urgings of jockey Lisa Allpress. Picking her way through the field, she found a gap turning for home and was able to comfortably run away to a 5.25-length victory over Jugador, with Lincoln's Kruz a further three-quarters of a length back in third. Although she had a high opinion of her filly heading into the race, Keegan was delighted to see her judgment vindicated on Saturday. "We were over the moon, especially as she missed the jump. But that's just first starters for you," Keegan said. "She has got enough class and ability to be able to overcome getting things wrong. She is still very raw and there is a lot of improvement to come in her yet. Towering at 17 hands, Keegan said they have taken a patient approach with Aimee's Jewel and have allowed her to develop into her big frame. "She is 17 hands and she still has to come up at the wither yet," Keegan said. "She is only a rising 4YO, so she is a very big lass and we have been very patient and gentle on her. Keegan believes that she has the ability to gain black-type in the spring, telling NZ Racing Desk she could possibly campaign in Australia next autumn. 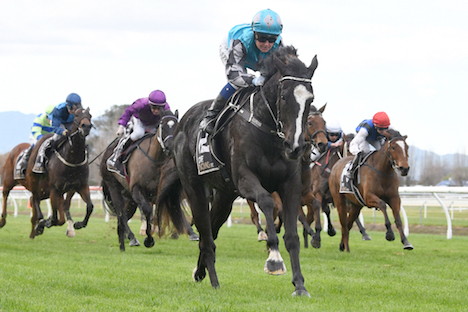