Racing Victoria has announced that it plans to disqualify an astonishing 81 Aquanita starters, reports racing.com. The unprecedented move extends as far back as 2010, and follows extensive investigation by stewards who analysed available evidence relating to 395 incidences involving race-day treatment. Caught up in the saga is 2015 Gr1 Myer Classic winner Politeness, as well as record-breaking jumper Black And Bent whose 2011 Grand National Hurdle triumph came under the microscope. The lengthy probe follows the disqualification of trainers Robert Smerdon, Stuart Webb and Tony Vasil as well as registered stablehands Greg and Denise Nelligan, Trent Pennuto and Daniel Garland. In what could prove a hefty expense for Victorian racing, it seems likely that Racing Victoria will pay out prizemoney to cheated connections from the 81 races. What happens next is: “The managing owner of each starter will now receive a show cause notice about the findings and will be asked for a response before stewards decide final penalties.” In the 81 instances that horses allegedly received race-day treatment, 24 of them won, with many finishing down the field, including as far back as sixteenth. More to come… 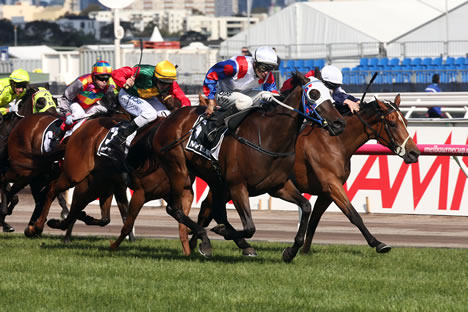 Politeness (blinkers) could be stripped of her Gr1 victory (pic: Mark Gatt)