Multiple Group winner Teleplay is among the latest 17 supplementary entries received for this month's Magic Millions National Broodmare Sale at the Gold Coast. A member of the Dynamic Syndications team, Teleplay proved to be one of the finest sprinting mares of last year's Melbourne Spring Carnival with back to back group wins. On Melbourne Cup Day she scored an easy win against a quality line up of mares in the Gr3 Maybe Mahal Stakes. Then at her next start she downed crack sprinters Home of the Brave and Hey Doc in the Gr3 Heffernan Stakes at Sandown. A daughter of leading sire Written Tycoon, Teleplay boasts five wins and earnings of over $440,000. Along with her first class racing record, Teleplay possesses an outstanding pedigree. Her dam, a Redoute's Choice daughter of Episode, is a half sister to former brilliant race filly First Seal. Other race fillies and mares who have joined the online catalogue as part of the supplementary are Perth-based stakes winner Jedaffair and the stakes placegetters Schilldora and Selica. To view the online catalogue with today's new additions click here. The National Broodmare Sale commences with the race fillies and maiden mares on July 20 - with Sunlight, Unforgotten, Invincibella, Etana, Santa Monica and Champagne Cuddles among those to go under the hammer on Day One. Supplementary catalogues for the National Weanling and Yearling Sales will also be unveiled soon and they'll include an outstanding line up of racetrack prospects. Already 40 weanling supplementary nominations have been received. 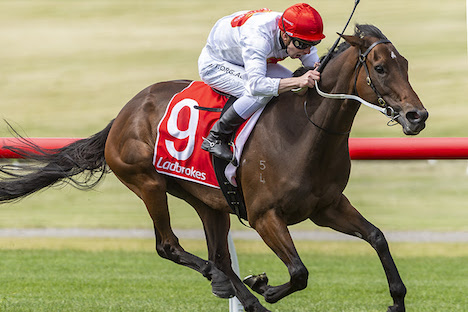 Teleplay has been added to the National Broodmare Sale (pic: magicmillions.com.au)