The search is on for a new Team Rogerson stable star after the retirement of Ferrando, who will shortly begin a stud career, reports NZ Racing Desk. "We've got some nice horses coming through, a good team of young horses," Graeme Rogerson said. "But Ferrando's not going to be an easy horse to replace. He was one of the fastest horses New Zealand has had. I trained Savabeel and Not A Single Doubt and they went on to be pretty good stallions and I think he's a chance of doing the same." Rogerson has formed a stallion syndicate for Ferrando, who will commence stud duties from Rogerson's son Gary's farm at Ngahinapouri for $2,500 plus GST. Fast 'N' Famous six-year-old Ferrando won the Gr3 Mongolian Khan Trophy (1200m) at Ellerslie at three, one of eight wins from 27 starts. But he will be most remembered for two narrow defeats in the Gr1 Telegraph (1200m) at Trentham, both at the hands of Enzo's Lad. On the second occasion, the judge took seven minutes before declaring the result, so close was the winning margin. 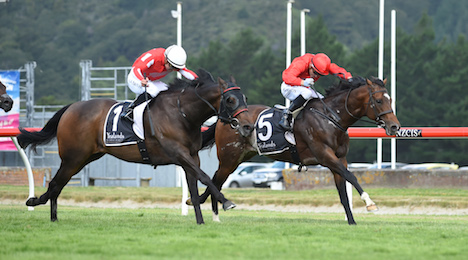 Ferrando (5) should have a Gr1 to his name (pic: Race Images Peter Rubery)