Team Rogerson started a big day at Te Rapa on Saturday in fine style with a victory by promising 2YO filly De La Terre, part of a large team lining up for the return to thoroughbred racing in the Waikato. A runner-up to exciting colt Cool Aza Beel on debut at Wanganui in September last year, De La Terre has now won two of her six raceday starts with co-trainer Graeme Rogerson predicting bigger things to come for his charge. "She's a good filly who hasn't had a lot of luck in her racing so far," Rogerson said. "Her last run was in the Karaka Million at Ellerslie and she should've finished closer than seventh as she didn't get the best of runs. Rogerson revealed,  "She has plenty ahead of her now and her long-term goal is the 1000 Guineas (Gr.1, 1600m) at Riccarton in November." De La Terre is the younger sister to another Team Rogerson stable runner in Aalaalune who was stakes-placed on three occasions as a 2YO, including a runner-up finish in the Gr1 Sistema Stakes (1200m) when trained by Jacob McKay. Purchased by Rogerson for $55,000 from the Westbury Stud Book 1 draft at the 2019 National Yearling Sale, De La Terre races in the colours of part-owner Lou Te Keeti who also owns Aalaalune with partner Val Gates. 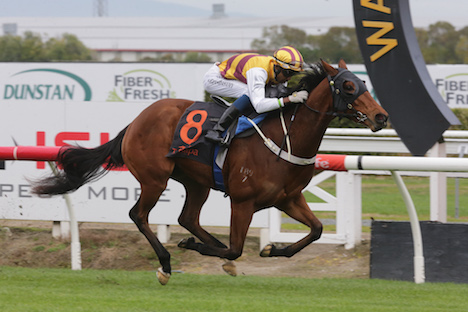