Trainers Leon Macdonald and Andrew Gluyas outlined the plan for stable star, Gr2 winner Dalasan (Dalakhani-Khandallah, by Kitten's Joy), telling racing.com they have high hopes for the four rising 3YOs they intend to bring to Victoria with him for the spring. Dalasan ran second in the Gr1 South Australian Derby at his last start. "Everything is obviously on the radar for him at this time," Macdonald said. "He will resume in Adelaide in the Spring Stakes at Morphettville on August 15. Alternatively, the Penny Edition at Morphettville on August 29 is another option, or he might even run in both." Another alternative, according to Macdonald, is Melbourne where his first run would be the Makybe Diva Stakes at Flemington on September 12. Macdonald noted, "By then we will be able to assess how he is going and where he is heading. Of the big races in the spring my gut feeling is 2000 metres could be his best trip so the Cox Plate is firmly on our minds." 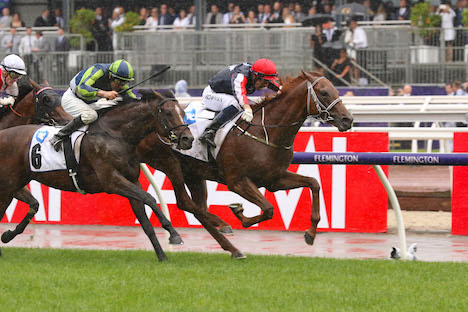 Dalasan is being aimed at the Cox Plate (pic: Mark Gatt)