Heading towards the new season where the juveniles will become 3YOs, South Australia's Macdonald-Gluyas stable's current 2YOs have the stable in good spirits. "As a group, numbers-wise, it looks to be the best crop of juveniles we have had on our hands for some time. Individually, they all have to improve again and get to a higher level just as Dalasan had to do last season. However, it does seem with what we have seen so far we are set to have some fun in the next 12 months," commented co-trainer Leon Macdonald. Gr3 National Stakes winner Extra Time (Shooting to Win-Gwynethanne, by Handsome Ransom) will head to the Spring Stakes first-up at Morphettville, then to the Danehill Stakes at Flemington on September 12 as a leadup for the Caulfield Guineas. "[He] was fantastic at his most recent start before a break when we put the blinkers on and he bolted in, winning the Gr3 National Stakes at Morphettville on May 16," Macdonald said of Extra Time who is set to mirror the same pathway as Dalasan as a 3YO. City winner So You Can (So You Think-Grojsman, by Al Maher) will also follow the same program as Extra Time. Another Award (Shamus Award-El Milagro, by Encosta de Lago) has a more immediate program. "She won an open maiden beating the older horses first-up at Murray Bridge and returns there this Saturday to contest the $100,000 SABOIS 2YO race. Following that she would run in the Listed Oaklands Plate at Morphettville on July 18…." Lastly, Macdonald made mention of Super Striker (Rebel Raider-Raja Lane, by Devaraja) who has placed at his last two starts and is a half-brother to Group-winning Sydney galloper Dawn Passage. "This guy is still yet to win a race but he is showing some really good signs," he said. 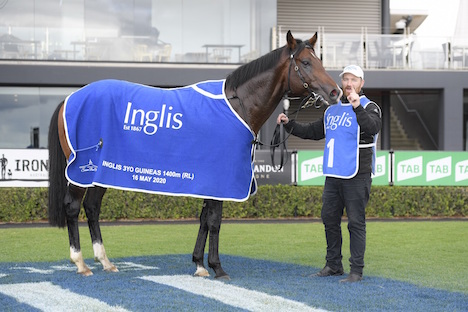 Dawn Passage (pictured) is a half to emerging 2YO Super Striker (pic: Steve Hart)