There are five runners on debut in Race 2 on the Kensington track at Randwick today, the Yes Yes Yes @ Coolmore Australia Handicap over 1150m for 2YO Colts and Gelding. Trial winner Wild Wind (I Am Invincible-Your Life Style, by Hussonet) is the most expensive yearling in the field, having been sold by Newgate Farm at the Inglis Easter Yearling Sale to Hawkes Racing for $600,000. The juvenile colt is from the family of Redoute's Choice (Danehill-Shantha's Choice, by Canny Lad). Sold at the same sale for $300,000 is the interestingly bred Solar Apex (Deep Impact-Aspen Summit, by Fastnet Rock). His Australian bred dam raced in Japan for Kazumi Yoshida and won twice there, and is a full sister to Gr1-winner Irish Lights. Homebred Gemology (Medaglia d'Oro-Chatoyant, by Flying Spur) is a sibling to group winners Montsegur (New Approach) and Tessera (Medaglia d'Oro); while Game Royal (Dundeel-Vocalise, by Redoute's Choice) is the third foal out of a winning daughter of a winning half-sister to Gr1 winner Serenade Rose (Stravinsky). Also on debut in this field is Tears of Effort (Reward for Effort-Tears of Argentina, by Umatilla) who was sold by Tarcoola stud for $20,000 at the Inglis Melbourne Premier Sale. The current TAB favourite for the race is Camerlengo (More Than Ready-Gamble Me, by Rock of Gibraltar) who ran second on debut behind Sixgun (Snitzel-Acquired, by O'Reilly). 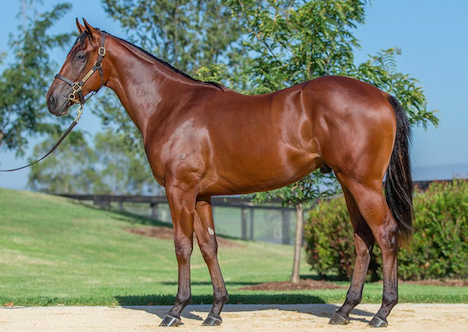