Australian General Champion Sire-elect, Snitzel (Redoute's Choice), on course to claim a fourth consecutive stallion premiership, has now posted domestic stakes wins in every single month of the 2019/20 season, and ticked off June's instalment when Ingham Racing's 4YO home-bred mare Sure Knee burst clear to win Saturday's $125,000 Gr3 Sapphire S. (1630m) at Doomben. She became Snitzel's one hundred-and-third lifetime stakes-winner, and is one of the 18 horses that have added 25 Australian Group & Listed Races to his record this season. That was the headline act, supported by five other metropolitan victories by Sure Knee's stablemates, Starla (also out of an Encosta de Lago mare) at Doomben & Orcein at Rosehill; the Mark Newnham-trained 3YO filly Fulmina, also at Rosehill; Morrissy for Leon & Troy Corstens at Caulfield; and Party Everyday for Tony Cruz at Sha Tin in Hong Kong. In around five hours, Snitzel's Australian season earnings increased by $383,000 to $16.6 million, giving him a $1.5 million break on Pierro, his closest challenger for the Premiership. It also means that June has been a million-dollar month for Snitzel – just like every month since September last year. 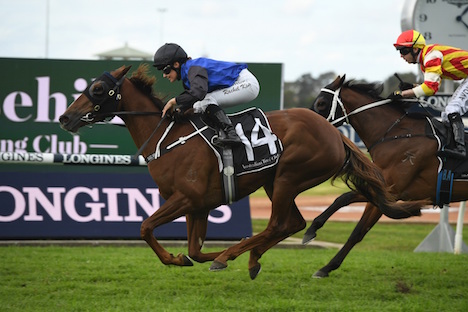 Fulmina was one of 6 Snitzel winners on Saturday (pic: Steve Hart)