Incumbent champion Hong Kong jockey Zac Purton has flexed his muscles at Happy Valley in a masterclass that could all but close the door on rival Joao Moreira. Hugely popular among Hong Kong’s betting mad racing public, the expat jockey has been involved in a long-standing tussle with the Brazilian rider dubbed Magic Man, however by riding a quartet of winners to land all four legs of the quadrella, the extension of Purton’s lead for the 2020 premiership by seven wins has made it progressively harder to play catch-up with just six meetings left. That would be the case under normal circumstances. Adding to the difficulty is that a suspension rules Moreira out of the third last meeting. Purton doesn’t want to jinx himself, remaining deferential: “Joao is such a great rider that you can never write him off and it’s only a matter of time before he comes out and has a big day. You’ve always got to be wary of the wounded." 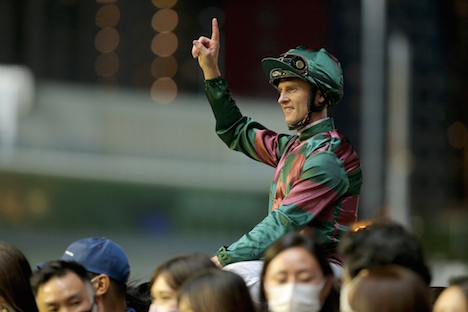