2019's New Zealand Bloodstock Yearling Sale top-priced colt No Limits (Savabeel-Make a Wish, by Pins) won his second trial on Tuesday over 900m, reports racingnews.co.nz. Sold by Waikato Stud for $1.4 million, the colt has now won two trials from three outings and will be set for the Gr1 New Zealand Two Thousand Guineas. Trainer Jamie Richards said, "I thought that he trialled well over a short trip (900m) and carried a bit of weight with Opie (Bosson, jockey) on. It wasn't about exerting him to win, but rather just a nice day out and teaching him that he's got a job to do." He will be freshened before a spring campaign. "All going well, he could be ready to race in August at Taupo. He's a pretty exciting colt, with a top-class pedigree and looks," Richards said. "We have a goal of getting him to Christchurch for the 2000 Guineas. That's where we want to be, trying to build a future for him as a colt and he's an exciting prospect for the lead-up races." No Limits is a half-brother to Listed winner Another Dollar (Ocean Park), and his winning dam is a half-sister to Gr1 placed winner Ambitious, the dam of Gr3 winner Strike the Stars (Savabeel). Also in this family is Gr2 MRC Autumn Classic winner Adelaide Ace (Savabeel), so the cross appears to work well. 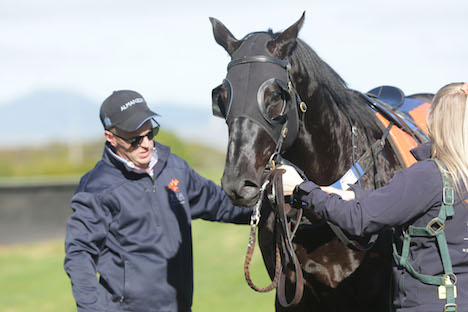