The McEvoy-Mitchell training partnership spoke to racing.com about the stable's plans for the spring. "With the retirement of our star mare Sunlight it will probably be left up to three of the elder statesmen of the team to fly the flag for the stable in the big sprints," said Tony McEvoy. Hey Doc (Duporth-Heyington Honey, by General Nediym), Despatch (Written Tycoon-Zoccoletta, by Fasliyev) and Dollar For Dollar (High Chaparral-Pretty Penny, by Encosta de Lago) will all be aimed at the spring sprints, while the Gr1 Empire Rose Stakes is the key target for Dollar for Dollar's sibling Pretty Brazen (Brazen Beau-Pretty Penny, by Encosta de Lago) as well as Xilong (Deep Field-Pane in the Glass, by Testa Rossa). "Xilong was Gr1-placed in Sydney in the autumn and then was a Gr2 winner in Adelaide. The Rupert Clarke could easily be another option for one or both of these two girls as well." The Gr2 Matriarch Stakes will be the main aim for Aristocratic Miss (Foxwedge-Golden Pedigree, by Gold Brose) and Silent Sovereign (Dalakhani-Silent Surround, by Face Vale). The McEvoy-Mitchell team also has a trio of rising 3YOs to watch with Kahaylaan (Pride of Dubai-Magic Nera, by Lonhro), Transplant (Pride of Dubai-Dalleth, by Fastnet Rock), and Violinist (Fastnet Rock-Keep on Singing, by Hennessy). "All have to measure up to the better races come spring time but we have good faith in this trio," he said. "Kahaylaan is a beautiful horse who had no luck first-up in Melbourne and then bolted in last time at Gawler. He is still learning but has a good engine and we are hoping he will be a Caulfield Guineas horse. In the fillies department we have high hopes for Violinist and Transplant. You got a glimpse of them at the Adelaide Carnival and we are confident they are genuine Group-class fillies." Lightly raced Divanation (All Too Hard-Makybe Diva, by Desert King) will be aimed at the country cups, as will Game Keeper (Fastnet Rock-My Tusker, by Volksraad). 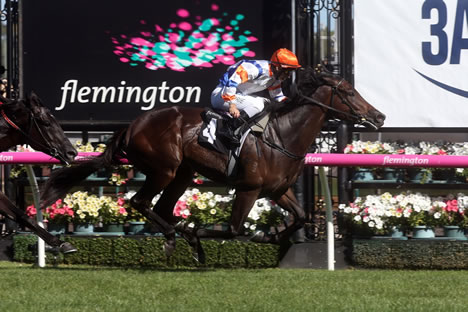 Hey Doc will be aimed at the big sprints (pic: Mark Gatt)