Group 1-winning miler Wyndspelle will take up stud duties at Grangewilliam Stud in South Taranaki this spring where he will stand for a fee of $7,500 plus GST. A son of Iffraaj, Wyndspelle competed in top-flight races across five seasons, performing with distinction in both Australia and New Zealand. Prepared by Johno Benner and Hollie Wynyard through the latter half of his career, Wyndspelle was a model of consistency, netting connections close to $700,000 in prizemoney. The well-bred entire claimed a deserved Group 1 victory when winning the Captain Cook Stakes (1600m) at his second last start and he bowed out with a narrow second placing in the Gr1 Thorndon Mile (1600m) in January. Group 1-placed on seven occasions, including a third placing in the Gr1 Cantala Stakes (1600m) at Flemington behind fellow Kiwi bred Shillelagh, Wyndspelle was runner-up in the Gr.1 Diamond Stakes (1200m) at two, Wyndspelle won the Gr2 Waikato Guineas (2000m) at three and proved most effective at a mile as an older horse. From the family of Brutal and a complete outcross to Danehill, Wyndspelle will stand alongside Zed, Derryn and The Bold One. 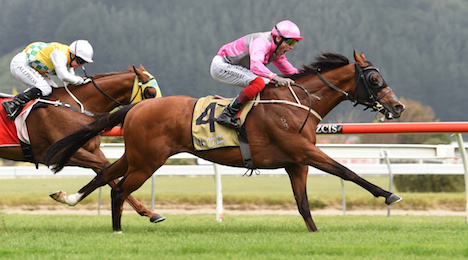