Trainer Damien Lane plans to use the same tactics for Oakfield Twilight (Zoffany-Bally Aura, by Bellotto) as he chases a hat-trick at Randwick on Saturday, reports racingnsw.com.au. "He's a horse we've always had an opinion of and we tried a lot of different things early days to get him to settle," Lane said. "But riding him the way we have the last few starts is the key to him. I think just letting him be comfortable is working and if he's five or six in front let him be. There's no intention from us to go out and lead by 10 lengths but if the horse is comfortable and he's that far in front I'm happy." The 5YO gelding won the Calyx at Coolmore Australia Handicap on 6 June over 1200m at Randwick, where he led by about three lengths coming around the turn and just lasted to beat Monte Ditto (Zoustar-Marcovette, by St Covet). It was his second start in blinkers and Lane said he hopes the track pattern allows the gelding to follow the rail after he noticeably rolled back to the fence in the straight last start. "The horse didn't help himself in the sense that the fence was off and when he was placed under pressure Chris said all he wanted to do was get to the fence," Lane said. "He was running out of petrol but he was also wandering back to the worst part of the track. So he is a lot better when he has that fence to follow." Oakfield Twilight has now won six of his 31 starts and earned nearly $250,000 after costing $105,000 at the 2016 Inglis Easter Yearling Sale. 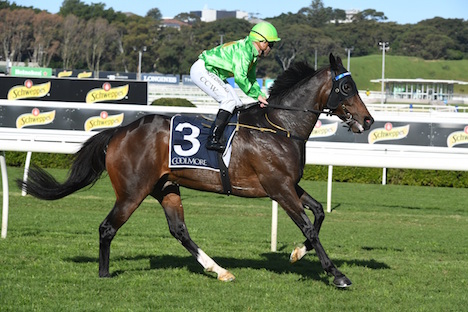