Former Kiwi Diamondsandbubbles continued her strong form on the synthetic track at Pakenham on Friday, setting a new track record when successful over 2200m. The David Brideoake-trained daughter of Commands came with a well-timed run under in-form rider Billy Egan to defeat Mr Monaco. The 5YO mare has now won three of her 10 starts for Brideoake, having commenced her career in the care of Moira Murdoch for whom she was a winner. “She is going super and it was good to get her back on the synthetic today,” assistant trainer Alex Woodhams told NZ Racing Desk. “Since we put the ear muffs on her she has been settling so well. They ran along at a nice pace and I knew as soon as she got some clear running she would be strong through the line.” Woodhams said ideally, they would like to keep the mare on the synthetic surface but it is challenging to find appropriate races on the surface once horses are rated 70 and above. Bred by the Hawkins family of Wentwood Grange under their Llanhennock Trust banner, Diamondsandbubbles is out of the High Chaparral mare High Joy, who is also the dam of Wednesday’s promising Sandown 2YO winner High Emocean. The mare’s former trainer Moira Murdoch remains in the ownership along with her sister in-law Adrienne Alderslade, as well as Mornington trainer David Brideoake who is a long-time friend of Murdoch’s. 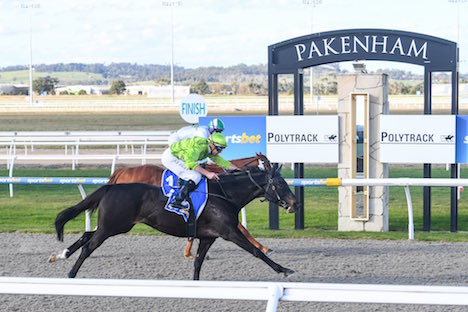