Odd-Spot: Ventura Storm (Zoffany-Sarawati, by Haafhd) put his obvious talent to good use when winning his first start over sticks on Tuesday at Ballarat, reports racing.com. Jockey Tom Ryan said, “I was very worried at the third-last (hurdle) because he was hating that (Heavy 10) ground. He's only little and those hurdles are like fences to him. It was a very good effort.” Winner of the 2016 Gr1 Milan Gran Premio del Jockey Club over 2400m, Ventura Storm was imported to Australia after that win with a record of 12 starts for six wins. He then had 16 starts in Australia before breaking through for a win in the 2018 Gr2 Moonee Valley Gold Cup, although he did run second to Winx (Street Cry-Vegas Showgirl, by Al Akbar) in the 2017 Gr1 Turnbull Stakes prior to that win. Tuesday’s win was only his second in Australia and brought his record to eight wins from 51 starts and over A$1.6 million. 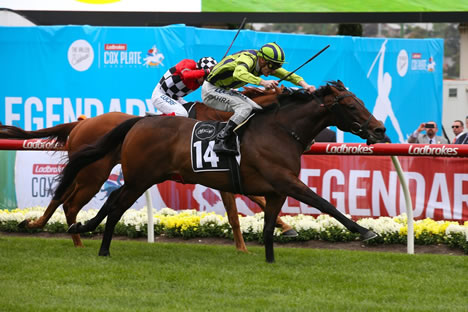