Team Snowden’s star colt King’s Legacy (Redoute’s Choice-Breakfast in Bed, by Hussonet) came back into work this week, and will be set for the Gr1 Golden Rose, reports racingnsw.com.au. The $1.4 million colt won both the Gr1 Champagne Stakes and Gr1 ATC Sires’ Produce Stakes as a 2YO this season before spelling. “I just wanted to see a bit of natural growth improvement, I wanted to see him a bit rounder and stronger all over and he’s done that,” Snowden said. “Whatever he did at two was going to be a bonus. He’s returned in good order and this should be his best prep. The Golden Rose is definitely on the table and possibly second-up.” The TAB has King’s Legacy at $11 for the Golden Rose behind Gr1 Golden Slipper winner Farnan (Not a Single Doubt-Tallow, by Street Cry) at $6 and Gr1 JJ Atkins Plate winner Rothfire (Rothesay-Huss on Fire, by Hussonet) at $7. “If he’s too far into a prep it might be a bit short for him so we’ll keep him fresh and have one run going into it. But he is going to be long enough in work, 10 weeks before he has a trial, so he will be nice and forward.” Snowden said going to the mile of the Caulfield Guineas is the logical step beyond the Golden Rose. “Right from a yearling he looked like a mile horse, if you ride him quiet he has a really good turn of foot. We noticed that towards the end of the autumn and the way he thrived on racing tells us he is going to be a tough horse. There’s a bit to work with and I’m looking forward to seeing what he does this prep.” King’s Legacy is from the family of Not a Single Doubt (Redoute’s Choice), and his stakes-placed winning dam is a half-sister to Gr1 Flight Stakes winner Oohood (I Am Invincible). 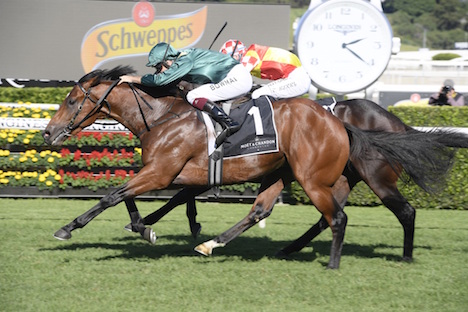