Rubisaki Stacks on Weight Ahead of Spring

Untapped 3YO filly Rubisaki has derived enormous benefit from a six week spell, reports racenet.com.au. The daughter of blue-blooded Coolmore stallion Rubick added 20 – 30kg and thickened across her back during her paddock holiday at Fulmen Park in Victoria, an outcome that has delighted Patrick Payne who trains her for Joe O’Neill’s Prime Thoroughbreds. Already boasting 8 wins (among them 3 Group wins & the $1 million Inglis Sprint) and 2 placings from her only 10 starts, Rubisaki is being aimed primarily at the Golden Eagle, however The Everest is a minor possibility. Payne advised, "We are thinking Cockram (Melbourne), Silver Eagle and then Golden Eagle… The Everest has been mentioned but that's a long way off.” Demonstrating that Payne isn’t getting ahead of himself, the former leading jockey added, "Personally, as a trainer I think her attitude exceeds her ability a little bit sometimes, especially when she got on soft ground in the autumn. But she has an amazing will to win." That she does, and Rubisaki will be high on the black book list of most racing fans for the new season. 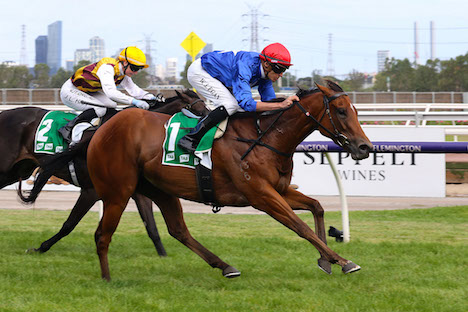 Rubisaki is being targeted at the Golden Eagle (pic: Mark Gatt)