Ahead of New Zealand's highly anticipated return to racing, Team Rogerson were out in force at the Te Rapa trials earlier this week with 48 representatives put through their paces, reports NZ Racing Desk. The training partnership of Graeme Rogerson, his wife Debbie, and granddaughter Bailey, were able to keep a few of their team in work at their Tuhikaramea private training property over the COVID-19 enforced lockdown period, which was reflected by their large contingent on Tuesday. "We were one of the lucky ones, we kept quite a few going," Graeme Rogerson said. Transporting nearly 50 horses is a massive undertaking, but Graeme Rogerson said his team has become accustomed to it and Tuesday's movements ran like a well-oiled machine. While Rogerson was pleased with the majority of his team's first hit-out, a trio of rising 3YOs have him particularly excited heading into the new season. They include $400,000 NZB graduate Tavirock who is being aimed at the Gr1 NZ 2,000 Guineas, Brazier – pencilled in to possibly have a tilt at the Victoria Derby – and hitherto luckless filly De La Terre who the stable hopes could run in the Gr1 NZ 1,000 Guineas. 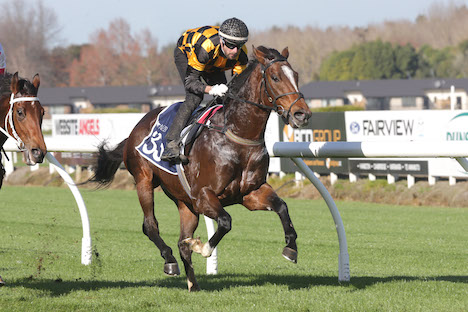