Thoroughbreds were a step closer to racing in the Waikato on Tuesday with a bumper set of trials conducted at New Zealand's Te Rapa track where 293 horses were put through their paces ahead of the brought-forward return to racing date of June 20 at Pukekohe Park. According to NZTM, despite the fresh conditions on a sunny winter's day, there was an air of optimism as racing people gathered like long lost friends reunited. Amongst them was Cambridge trainer Tony Pike who said both horses and humans would derive benefit from the outing. "It was a bit of a novelty actually," Pike said. "I think a lot of people were happy to turn up today and everyone was pretty proactive with the 33 heats, which is just over the normal limit of 30 they are allowed to have… Everyone is starting from scratch so there is probably more horses at this time of year than normal." Pike sent out a number of winners on the day and said residual fitness played a role. Among Pike's nine-strong team that had a hit-out at Te Rapa, handy galloper Cyber Attack looks a horse ready to put his best foot forward early in the piece and could be one of three or four runners for the stable on resumption day, where the entire Pukekohe card will be sponsored by Dunstan Horsefeeds. While the equine talent will be better for the run, jockeys were also enjoying a good blow-out under more strenuous conditions. "There is nothing like race fitness for horses and jockeys," Pike said. "Trackwork doesn't get you quite race fit so I'm sure a few of the horses and jockeys will take a lot of improvement out of today." 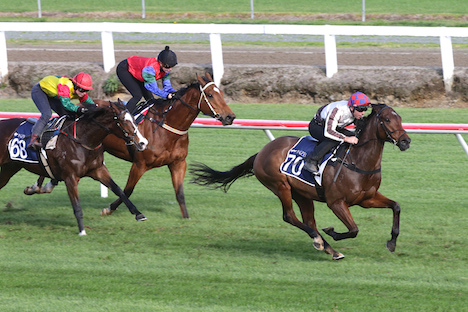