All points of Queensland were cheering loud as star galloper Tyzone swept home to win Saturday's Gr1 Stradbroke Handicap (1400m) at Eagle Farm. Notching a first Gr1 success for so many of his connections, Tyzone produced his usual stunning finishing burst to win an exciting edition of the famous Brisbane race. The win was the first at racing's elite level for Edmonds Racing - the Gold Coast based training partnership of father-son team Toby and Trent Edmonds. "It's a big thrill - finally," a delighted Toby Edmonds said. "I had to wait for [son] Trent to come on board to get it. The horse delivered. He's very strong and back to handicap conditions today was a big thing." Master North Queensland horseman Roy Chillemi, who trained Tyzone to 10 wins earlier in his career said the win provided him with an incredible thrill. It was Chillemi who spotted Tyzone at the 2015 Magic Millions Gold Coast 2YOs in Training Sale and he went to $60,000 to secure him from Kenmore Lodge for a group headed by leading owner and businessman Tom Hedley. There were also loud cheers from the Bond family's Kenmore Lodge property when the chestnut gelding stormed home to score his biggest win. Cameron and Kellie Bond, who've been preparing breeze up horses for about a decade, reared Tyzone from a foal, broke him in and prepared him for sale. Kenmore Lodge will present another quality draft at the 2020 Gold Coast 2YOs in Training Sale later this year. While Tyzone got the decision on the post, the effort of the runner-up Madam Rouge was outstanding. She was left in front a long way out and was only grabbed late. Madam Rouge had shot to prominence in January when she stormed home to win the $1 million Magic Millions Snippets (1200m) at the Gold Coast. 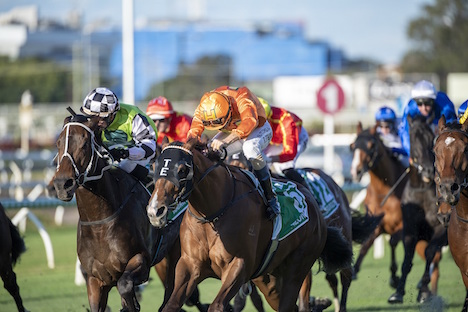 Tyzone gets his head down for Robbie Fradd (pic: Steve Hart)