New Zealand Thoroughbred racing will resume earlier than anticipated with the Counties Racing Club hosting a meeting on Saturday 20 June, reports NZ Racing Desk. New Zealand Thoroughbred Racing (NZTR) announced the move on Thursday based on feedback from trainers who have indicated they had horses ready to return to the track sooner than the planned resumption in early July. “We are delighted we can resume earlier than originally expected,” NZTR chief executive Bernard Saundry said. “Our first race meetings since lockdown will be held with owners being able to attend and, with the expectation that the country may soon move to level one, it might be that full crowds will be able to be on course from the outset.” The meeting scheduled for Counties (Pukekohe) is an addition to the original calendar and will carry the same $15,000 stakes across the board, with free nomination and acceptance for all starters and payment back to 14th place in each race. “RITA and the code have worked together to make this earlier start possible,” Saundry said. The Canterbury Jockey Club meeting originally programmed for Friday 3 July, will move to Saturday 27 June. Racing in the Central Districts will get underway, as planned, at Awapuni on Saturday 4 July, which will also see the second Northern meeting of the resumption period at Te Rapa. 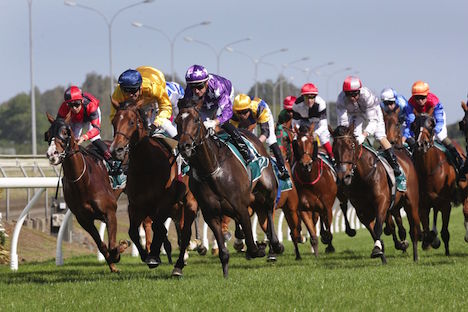 Racing will resume at Pukekohe on 20 June (pic: Trish Dunell)