Australia's E-Trakka Launched in US

Pioneered in Australia in 2006, E-Trakka fitness monitoring system records a horse's heart rate, speed, stride length, and sectional times, then automatically uploads that information to a cloud-based data storage and viewing program. Kentucky-based veterinarian Greg Fox will become the firm's first North American representative for the product, reports thoroughbreddailynews.com. "My goal is not just to be the guy who sells it, but to help analyze the data for the connections. Because I really believe that is part of the reason this type of data has not been embraced in horse racing–a lot of people are not really in a position to commit the time to learn how to analyze the data," said Fox who runs Thoroughbred Performance Diagnostics LLC and trained stakes-winners Tizdejavu, Slew's Tizzy and Battle of Hastings during a five year stint as a trainer between 2005 and 2010. As a former trainer, he knows it can be a hard sell if a data-gathering system is too much trouble to implement seamlessly. "That's number one—this cannot be unreliable or time-consuming under the stress of morning training," Fox said. "Trainers in general are under an incredible amount of time pressure. They're very reluctant to add moving parts to what is already a very complex process in the morning." Fox said another advantage of E-Trakka as a diagnostic tool is that it provides one of the few ways of measuring a horse's athleticism when the animal is not at rest. "The true relevance of a way a horse is going can only be truly interpreted by the stress that the horse is experiencing in movement," Fox said. "In Australia, Chris Waller, the leading trainer, has used the system for many years. And he has 15 of these in use at several different racetracks. If you have a 20-horse stable, you'd like to have four blankets, probably, so that on work days you can have one set tacked up while the other's on the track." 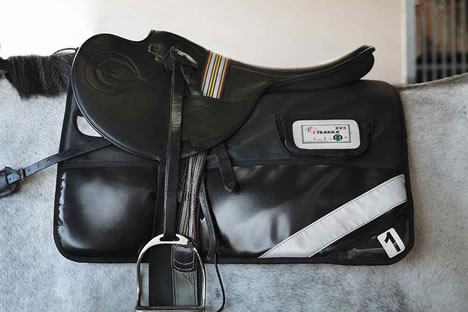