A colt by Vinery Stud’s freshman sire Press Statement (Hinchinbrook-Kaaptive Empress, by Kaaptive Edition) ran up to his formlines with an eye-catching win at Randwick’s Kensington track on Wednesday. Although a well beaten sixth on debut, Equation had started strongly fancied on that occasion where he finished behind one of the current late season form 2YOs in Peltzer. Ridden by Tommy Berry who was puzzled by the Press Statement colt’s fading debut – such is the high regard in which he holds him – the leading hoop made sure second up with an impressive turn of foot that saw Equation finish 2.5-lengths clear of promising Falcon (Not A Single Doubt). Berry believes the Ciaron Maher and David Eustace-trained juvenile has an extremely bright future as a 3YO. Press Statement ($13,750 in 2020) now has four individual 2YO winners after the $110,000 Magic Millions National weanling graduate from the Sledmere draft broke his duck. 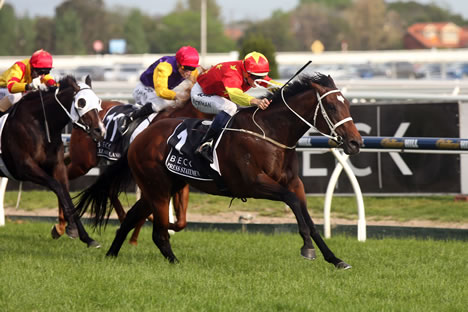 Press Statement was a Gr1 winner as a 2YO and a 3YO (pic: Mark Gatt)