Gr1-winning 3YO D'Argento (by So You Think) has been secured for stud duties by Bowness Stud, Young, and will commence his stallion career this coming breeding season at an introductory service fee of $16,500 (inc. GST). One of the outstanding members of an exceptional Classic generation which featured the likes of Trapeze Artist, Kementari, Pierata and the subsequent Hong Kong star Furore, D'Argento established himself as an elite level performer with a series of highly-rated performances headlined by his Gr1 Rosehill Guineas success. Starting with a 2YO success and unbeaten in his first three career starts, the Chris Waller-trained son of So You Think (NZ) raced against the finest gallopers in training throughout his career. Placed third behind the Kementari and Pierata in a vintage Hobartville Stakes (with Trapeze Artist running fourth); D'Argento claimed the Rosehill Guineas by a clear-cut margin and finished a close-up fourth in the time honoured Doncaster Handicap behind Randwick cult figure Happy Clapper, before returning in the spring to contest the Winx Stakes (G1), Theo Marks (G2), Epsom Handicap (G1), Caulfield Stakes (G1) and W.S. Cox Plate (G1) where he added a further three placings. Highly rated by Timeform, the Star Thoroughbreds purchase whose Redoute's Choice dam won the Listed MRC Debutante Stakes (900m) as a 2YO, was retired due to injury with earnings of $1,103,525. Trainer Chris Waller concluded: "When you consider he probably should have won a Doncaster and Epsom it certainly would have made him into a high-profile stallion, but we just came up short… I will certainly be supporting and helping to promote him as a stallion." 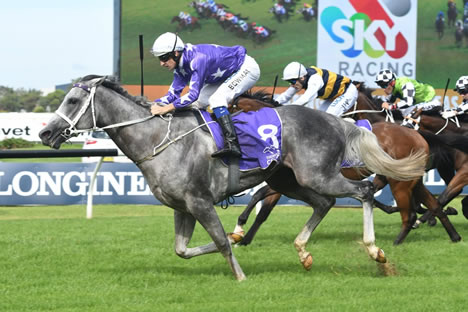