Mungrup Stud freshman I’m All The Talk (Stratum) sired his first winner when Watch Me Dance launched a last-to-first burst in the TABtouch Maiden (1016m) at Bunbury earlier this week, reports tbwa.com.au. Despite giving away a dozen lengths off in the juvenile sprint, Watch Me Dance sprouted wings when angled to the centre of the track by jockey Ryan Hill. “Wow! What a performance,” enthused trainer Steve Wolfe who predicted his filly will be hard to beat in the $250,000 Magic Millions WA 2YO Classic RL at Pinjarra on February 8. “I like the progeny of I’m All The Talk. They work with you the whole way..." Commercial Bloodstock’s Noel Carter bought Watch Me Dance from Mungrup Stud for $34,000 at the 2019 Perth Magic Millions, and she is raced by a ladies syndicate that includes Wolfe’s wife Maureen and Mungrup Stud’s Jan Williamson. Her dam Coventry To Rio (Oratorio) was a stakes-placed winner at Ascot and she has another I’m All The Talk colt catalogued as Lot 329 at next month’s Magic Millions. Apart from the brother to his first winner, I’m All The Talk has 13 yearlings for sale in the Swan Valley on February 17 and 18. Another highlight is the colt from fleet-footed sprinter Scuffs (Lot 99) who won to Listed level in a Summer Scorcher at Ascot. Meanwhile, All The Talk, a dazzling 3-length winner of the Gr3 Skyline Stakes in Sydney, was represented in last weekend’s Listed Blue Diamond Preview (C&G) where son Mr Have A Chat finished fifth behind boom 2YO Hanseatic. 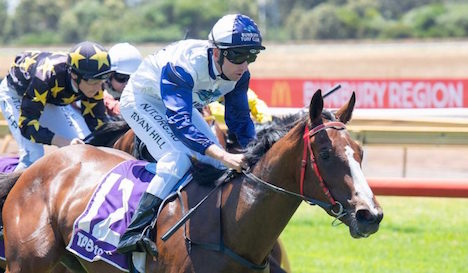 Watch Me Dance rounds her opposition up (pic: Western Racepix)