Legally Bred To Speed 2YO on Debut

Ten days after winning a Warwick Farm trial ahead of highly talented 2YO Global Quest – also raced in the Aquis silks but trained by Chris Waller – exciting juvenile prospect Setanta (Fastnet Rock-Legally Bay, by Snippets) will provide racegoers with a first chance to see him on a racetrack this evening at Canterbury in Sydney. In the same way that some people enjoy tracking aircraft for a hobby, it’s natural for aficionados to want to follow the careers of high profile yearlings, and Setanta more than meets the criteria. Knocked down for $2.3 million from the Segenhoe Stud draft at the 2019 Inglis Easter Sale, the Ciaron Maher and David Eustace-trained 2YO is a full-brother to Coolmore Stud’s dual hemisphere Gr1 winner Merchant Navy and the filly Jolie Bay, runner-up in the Gr1 Coolmore Stud Stakes. Out of the twice Gr1-placed mare Legally Bay, a half-sister to Gr1 Myer Stakes winner Bonaria, it’s a hugely commercial pedigree for a stallion prospect. Setanta is in Race 1 which jumps at 6.15pm where he is one of four runners floating between $3.30 and $4.50 in the small field of seven. 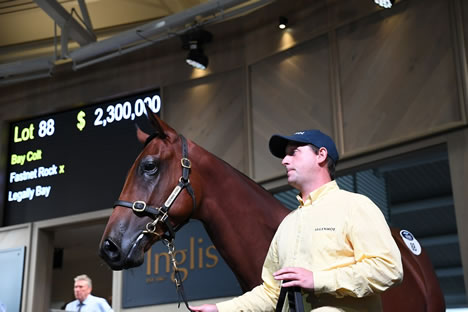 Setanta created a lot of hype as a yearling (pic: Steve Hart)