Heading into last year’s autumn carnival, and the Inglis Easter Sale, Corumbene principal George Altomonte knew that he had a very special colt, one that subsequently topped the sale at $2.8 million. This year he not only heads to the sale with another cracking draft of yearlings from his select group of broodmares, but also with one of the best 3YO colts in the country whose potential is untapped. Despite easing in betting markets in the face of strong support for favourite Alizee and star miler Kolding ahead of Randwick’s Gr2 Expressway Stakes (1200m), Altomonte’s appropriately named Gerald Ryan-trained sophomore Standout (Exceed and Excel-Bahia, by Snippets) won with plenty in hand after sitting midfield, running a sizzling 33.52 for the final 600m. Now the winner of 4 races from 5 starts, the highly touted colt announced himself as one of a dazzling member of his age group. With a world of possibilities ahead, Altomonte has an extra two reasons to have a spring in his step. In addition to Standout’s massive stud potential (and value), a full-brother to Standout and their Gr1 Golden Slipper-winning half-sister Overreach is part of Corumbene’s Easter consignment. Even though Altomonte isn’t one to get ahead of himself, that’s like knowing the winning lottery numbers before they’re drawn. 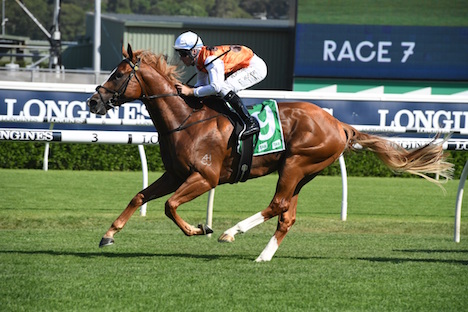 Standout was a clear winner of the Expressway Stakes (pic: Steve Hart)