After some stunning success on the opening day at Karaka on Sunday, Cambridge consignor Trelawney Stud were back in the thick of the action on Day 3. The Taylor-family owned breeding nursery enjoyed a magical twenty minutes on Sunday where they sold three yearlings for a combined $1.575million including an I Am Invincible colt for $625,000. The international buying bench were well alert to their Exceed and Excel ex Gallwitz filly when she hit the auction ring as Lot 614 on Tuesday with the athletic individual featuring a raft of stakes winners in her extended pedigree including 2010-2011 Joint top Australian three-year-old Retrieve. When the dust settled it was Victorian racing identity Peter Moody who topped the competition with a final offering of $500,000. “She’s a lovely filly who had great quality about her,” Moody said. “Trelawney Stud are an unbelievable nursery and a farm that I’ve had a lot of success with personally and with clients of mine as well. She’s got to make her own pedigree as she is a little bit light in the first dam but she looks like she has the quality to do it. “You know the family is going to be bred up around her as Trelawney are such great breeders but let’s hope she can stamp her own authority without worrying about family members carrying the flag for her.” 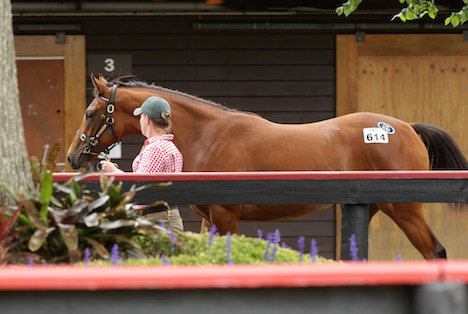