It took nearly all day to reveal the sale topping yearling for Day 2 of New Zealand Bloodstock's National Yearling Sale but when it was unveiled the wait was well worth it. Lot 454, the Savabeel colt form Fastnet Rock mare Bayrock had been confidently predicted to attract plenty of attention from the assembled buying bench, and didn't disappoint as a prolonged duel over several minutes was finally settled in favour of the King of Karaka, David Ellis. Ellis silenced his opponents with a final offering of $875,000 for the colt who is closely related to multiple Gr1 winner Merchant Navy, with his dam being a full-sister to the Gr1 Diamond Jubilee Stakes (1200m) winner who now stands at stud at Coolmore Australia. Ellis headed off Sydney trainer John O'Shea to provide Windsor Park Stud with a special piece of history as the highest priced yearling they have consigned at Karaka. "He is one of the nicest colts we have ever brought here to the sale, so we're very happy," Windsor Park's Rodney Schick said. 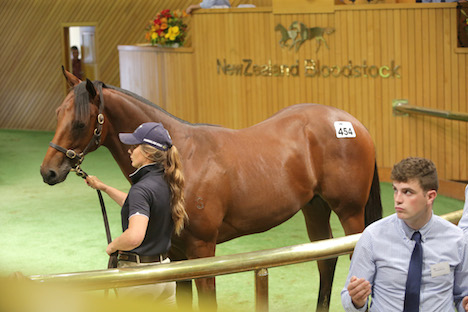