Brent and Cherry Taylor of Trelawney Stud, whose silks have been prominent in feature races of late, experienced a thrilling morning at Karaka on Monday where they sold three yearlings for nearly $1.6 million. Lot 241, the Tivaci colt out of Ruqqaya, was the first yearling on day two of New Zealand Bloodstock’s National Yearling Sale to hit the $500,000 mark when knocked down to the bid of bloodstock agent Bruce Perry. A half-brother to dual Gr1 winner and Yulong stallion Grunt (O’Reilly), the colt was the pick of the sale for Perry who admitted he was surprised he was able to secure him for $500,000. “I didn’t think I would get him, I was tapped out,” Perry said. “He’s for a colts syndicate. Each year we come and buy two or three yearlings. He was just the horse we wanted. He was the pick of the sale on type and he is what I look for, I love the horse.” Two lots later Taylor was celebrating the sale of Lot 243, the Ocean Park filly out of dual Gr2 winner Ruud van Slaats, who was knocked down to the $450,000 bid of Peter Moody who is set to return to the Australian trainers ranks later this year. Trelawney’s morning was about to get better with Te Akau principal David Ellis going to $625,000 to secure lot 247, the I Am Invincible colt out of Sancerre. “He is a beautiful colt and Mark Pilkington was the underbidder, who I regard as one of the best judges in the world, so it was great that such a great eye saw the same as what we did,” Ellis said. “He was bred by one of our great nurseries of all time and some of the best horses New Zealand has ever produced have come off that farm.” 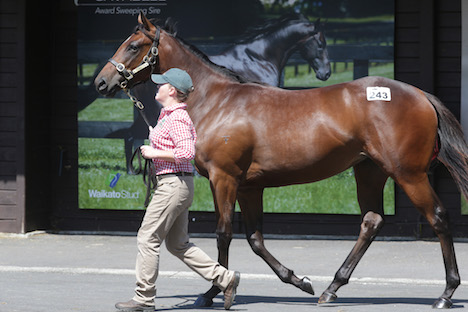