For Arrowfield’s Champion Australian sire Snitzel, this year it’s been all about his ninety-sixth stakes-winner Scallopini, city winners Sure Knee & Juan Diva and finally, Taikomochi winning the $150,000 ATC Australia Day Cup 2400m LR. Those four wins alone have added around $250,000 to Snitzel’s season earnings and elevated him into third spot on the General Sires’ Premiership with $8.1 million. It’s a move that puts him well and truly in the hunt for his fourth consecutive title. Interestingly, Taikomochi is the first of Snitzel’s progeny to win a stakes race beyond the 2040m of Shamus Award’s 2013 Cox Plate. Nine other Snitzel sons and daughters have won in black type company beyond 1600m, including South African Gr1 winner Heavenly Blue and Hong Kong star Sun Jewellery. Three Snitzel colts will be offered at next month’s Inglis Classic Sale, two of them by Arrowfield and one by Aquis Farm, followed by 9 lots at Inglis Premier and a dazzling draft of 67 Snitzel yearlings catalogued for Inglis Easter. 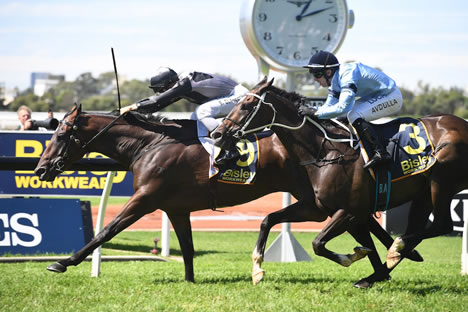