At Ellerslie in Auckland, boom 3YO Catalyst overcame a scare to brilliantly win Saturday’s Gr3 Henley Park Mr Tiz Trophy (1200m), extending his winning sequence to six. Lining up in the day's supporting 3YO feature, the Australian-bound Darci Brahma gelding was having his first start since his dominant victory in the Gr1 New Zealand 2000 Guineas (1600m) at Riccarton in November. Despite carrying a testing impost of 60.5kg, he started as the red-hot $1.10 favourite and was expected to outclass his opposition again. That confidence took an immediate hit as Catalyst made a slow start, dropping out to a clear last in the first few strides of the race, leaving his supporters with hearts in mouths. When Troy Harris asked for the acceleration that carried Catalyst to four brilliant stakes wins through the spring, the star sophomore bounded past his opposition and shot clear, winning by an easy 2.5-lengths in slick time that could have been a lot faster had the chips fallen his way at the start. 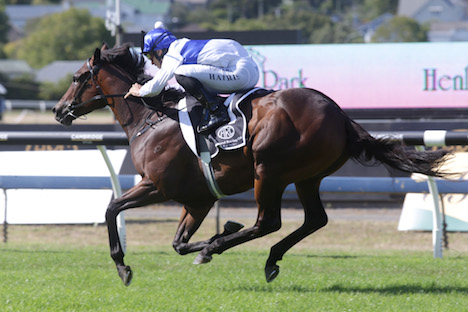 Catalyst charges away in the Mr Tiz (pic: Trish Dunell)