Cult 3YO gelding Alligator Blood (All Too Hard) might well take the autumn road less travelled than that which is expected of him. According to smh.com.au, the David Vandyke-trained sophomore, who dazzled in the $2 million Magic Millions 3YO Guineas (1400m) is no certainty to run in the All-Star Mile against open even if he gets the public votes required, with a decision likely after the conditioner has a good look at him on Wednesday. Mindful of the myriad opportunities that lie ahead, Vandyke could instead pursue a winter campaign in Queensland where he’ll have home ground advantage, and then look at tackling October’s $7.5 million Golden Eagle (1500m) in Sydney against fellow 4YOs. Stating that the long term future of Alligator Blood is his primary consideration – as a gelding he could race for at least another 5 seasons – Vandyke doesn’t want the voting public to assume his charge is a lock for the richest turf mile race in the world: “We are aware that voting has started for the All-Star Mile and it's good to see him getting support, so we want people to know what we are doing and they will on Wednesday, so they don’t waste a vote." 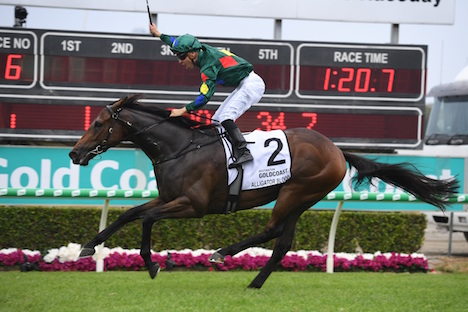