Golden Slipper the Focus for Cellsabeel

Turning one’s back on a shot at $2 million when you train the odds-on favourite is a brave call, yet that’s exactly what Ciaron Maher and David Eustace might advise the owners of Saturday’s exciting Randwick 2YO winner Cellsabeel (Hinchinbrook). According to racingnsw.com.au, the impeccably-bred daughter of ill-fated Snitzel three-quarter brother Hinchinbrook and Our Egyptian Raine (a Gr1-winning sprinter who finished runner-up in eight Gr1 races) is likely to miss the restricted $2 million Inglis Millennium because the prizemoney doesn’t count towards the Golden Slipper. Maher revealed, “The Millennium might not be an option, the idea is the Slipper.” The powerful training partnership will likely point the 6-length victress at the Gr2 Silver Slipper (1100m) in late February. The stable also has the luxury of training recent Magic Millions 2YO Classic winner Away Game who is now in Sydney to persue a similar path to the Golden Slipper. Meanwhile, on Friday at Canterbury, the stable sent out high-priced Aquis debutant Prague (Redoute’s Choice) whose impressive win has him earmarked for autumn riches. 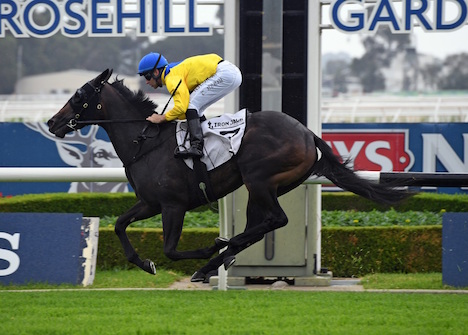