Travelling Light Too Good For The Boys

Class kiwi filly Travelling Light displayed a brilliant turn of foot to down her male rivals as she left no excuses for the beaten brigade in the Gr1 Woodridge Homes Levin Classic (1600m) at Trentham. The El Roca 3YO had gone close to Gr1 glory when finishing third in the New Zealand One Thousand Guineas (1600m) at Riccarton in November after being thrust into the unfamiliar role of pacemaker that day. Trainer Ben Foote and co-owner Col MacRury felt their charge was disadvantaged that day by not being able to show her dazzling acceleration so a plan was hatched to trail in behind in last Saturday’s contest. Rider Sam Collett, who had to make the difficult decision to give up the mount of race rival Riodini, followed the blueprint to perfection as she sat back on the fence on a muddling speed before tracking up behind race favourite Harlech approaching the home bend. When Collett pushed the go button the response was immediate with Travelling Light dashing to the front before easing to a comfortable length victory over a game Harlech with Riodini battling resolutely out wide for third. Bred by MacRury and his father Ian who shares in the ownership of the filly with his son, Travelling Light is the first Gr1 winner for her sire El Roca who stands at Westbury Stud. According to NZ Racing Desk, El Roca is well represented at the upcoming National Yearling Sale at Karaka where a total of twenty-four individuals will go under the hammer during the six days of selling including five during the Book 1 session that starts on Sunday January 26. 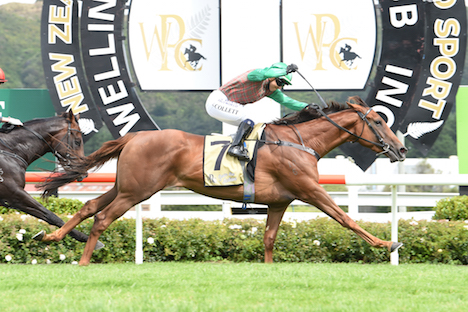