Star Thoroughbreds-owned mare Invincibella lived up to her owners’s name by creating history at the Gold Coast on Saturday with a third consecutive edition of the $1,000,000 Sky Racing Active Magic Millions Fillies & Mares (1300m). In doing so, Chris Waller’s daughter of I Am Invincible – who was a $180,000 purchase by Star Thoroughbreds out of the Sledmere Stud draft at the 2015 Gold Coast Yearling Sale - became the first horse ever to win the same Magic Millions race three times. Invincibella’s 0.75-length victory over Irithea and Romani Girl was the most decisive of the six-year-old’s three Magic Millions wins and saw her overall record improve to 12 wins from 43 career starts, with more than $3 million in the bank for connections. Waller, who made it a double for the day following Madam Rouge’s earlier victory in the Magic Millions Snippets, said Invincibella was a pleasure to train. "After a few years, and we’ve seen it with a few other good horses in our stable, you keep things simple and they keep turning up and performing their best and it’s very special to be a part of horses like that.” Champion hoop Hugh Bowman noted that, despite Invincibella having won multiple Stakes races including last year’s Group 1 Tatts Tiara (1400m), he had little doubt the 1300m of the Magic Millions Fillies and Mares is her best distance. 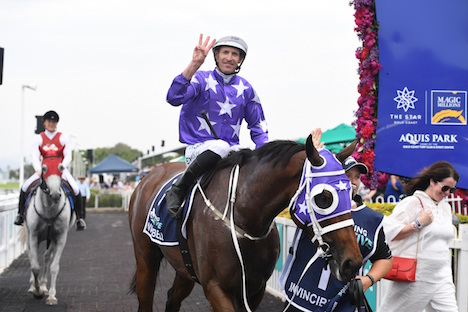