Away Game Outpoints 2YO Classic Rivals

Jockey Luke Currie won a second The Star Gold Coast Magic Millions 2YO Classic (1200m) in three years when emerging filly Away Game (Snitzel-Elusive Winder, by Elusive Quality) stunned her rivals in Saturday’s $2 million contest at the Gold Coast. Trainers Ciaron Maher and David Eustace’s daughter of Snitzel let down with a dazzling turn of foot inside the final 300m to quickly put a margin on her rivals and held a two length margin (Not a Single Doubt) over Stellar Pauline and Conceited (Brazen Beau) on the line. Currie, who won the 2YO Classic about superstar Sunlight in 2018, said the pint-sized filly had improved since her win in the Listed Calaway Gal Stakes (1100m) last month. "There’s not much of her but she’s definitely got some ability," Currie said. "I rode both of Ciaron and Dave’s horses last time and I thought the other horse Rathlin (who flew home) might shade her a bit. But when we worked them together here last Saturday, she had the wood on him." Away Game was purchased out of the Mill Park Stud draft for $425,000 by Kerri Radcliffe Bloodstock at last year’s Gold Coast Magic Millions Yearling Sale. Maher said he always thought the filly was one of the stable's top seeds for the season's feature two-year-old races. The win was made even sweeter for the filly's all-female group of owners who took home an additional $325,000 as part of the Magic Millions Racing Women’s Bonus. Away Game’s three-quarter sister by Not a Single Doubt was purchased by Aquis Farm on Thursday for $580,000. 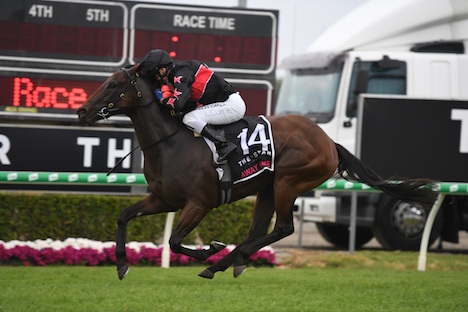 Away Game was a comprehensive winner (pic: Steve Hart)