Matamata trainer Pam Gerard had been hoping for a turn of luck with barrier draws ahead of Trentham's feature meeting on Saturday, and her prayers were answered. Gerard, who trains in partnership with Michael Moroney, will have two strong chances in Group races on Saturday and she said she was over the moon with their draws. Exciting 3YO Harlech will jump from the ace barrier in the Gr1 Woodridge Homes Levin Classic (1600m), while promising stayer Masetto has drawn gate two in the Gr3 Barneswood Farm Trentham Stakes (2100m). "I am due some good barrier draws, I have had nothing but outside barrier draws for the last month. I must be doing something right," Gerard said. Harlech will be tested at a mile for the second time this weekend after finishing runner-up to Catalyst in the Gr1 New Zealand 2000 Guineas (1600m) at Riccarton in November. Harlech subsequently went on to record the same placing behind Travelling Light in the Listed Uncle Remus Stakes (1400m) at Ellerslie on Boxing Day and Gerard said the son of Darci Brahma was beaten by a bad barrier draw: "It will be interesting on Saturday because he has never had a good barrier draw, so we have gone from one extreme to the other." Gerard is hoping Harlech can breakthrough for his maiden Gr1 win in New Zealand before his likely move across the Tasman to join Moroney's Melbourne barn. 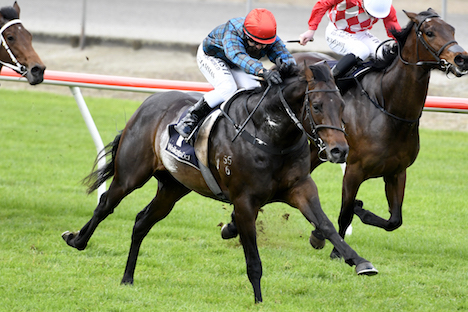