Southern Raiders Hold The Key to 2YO Classic

The week of weeks is underway at the Gold Coast, with the commencement of the yearling sales on Wednesday setting the tone for the grand final on Saturday; the running of the Magic Millions Classic (1200m) and Magic Millions Guineas (1400m). Interstate entries dominate the market in the Classic, a race that Queensland holds a proud record in winning (Phelan Ready (2009), Military Rose (2010), Real Surreal (2013), Le Chef (2015) and Houtzen (2017)), but  this year the state's best hopes are Gotta Kiss, Dusty Tycoon and Wisdom of Water who are all double figures in betting, behind the Paul and Peter Snowden-trained Aim who is currently favourite at $5.50. Queensland is however strongly represented in the Guineas by the David Vandyke-trained Alligator Blood, whose two dominant last start wins at Eagle Farm have placed him front and centre of betting at $1.90, ahead of top weight Dubious (trained by Ciaron Maher and David Eustace). 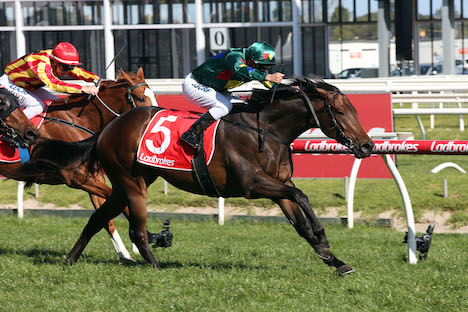 Alligator Blood looks the testimg material in the 3YO Classic (pic: Mark Gatt)