On the opening day of the 2019 Tattersalls December Foal Sale, four weanlings topped the 60,000 guineas mark. Night Of Thunder was responsible for the joint highest priced lot on the opening day when a daughter of Darley’s leading first season sire was knocked down to Jamie Railton for 65,000 guineas. Consigned by Genesis Green Stud, the March born filly is out of Harlequin Girl, a half-sister to the Gr2 Gimcrack Stakes winner Blaine as well as the Listed Redcar Two Year Old Trophy winner Bogart. Sharing top billing at 65,000 guineas was Ballyreddin and Kellsgrange Studs’ El Kabeir colt who was purchased by Philipp Stauffenberg’s Stauffenberg Bloodstock Services. Out of the Invincible Spirit mare School Run, the chestnut colt is from the family of multiple Gr1 winners Dream Ahead and Fairyland, and is by Yeomanstown Stud’s freshman son of Scat Daddy. The joint third highest priced lots of the day were a filly by Tally Ho Stud’s Kodiac out of Payphone, from the family of Danehill, who made 62,000 guineas, the same price as a Territories colt out of the New Approach mare Never Change. 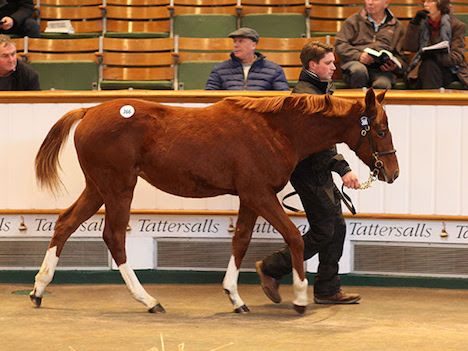